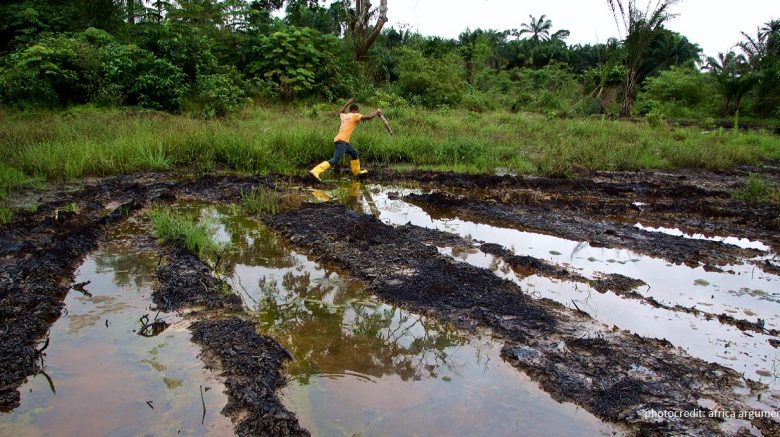 According to a research by Gigi Nwagbo :”oil pollution in the Niger Delta”

The Niger Delta spanning about 70,000 square kilometers in the southern part of Nigeria, is the region in Nigeria through which the Niger and Benue rivers empty into the Atlantic Ocean. Although the Niger Delta comprises only 7.5% of Nigeria’s total land mass, it is inhabited by at least 25 million people representing over 40 ethnic groups and 250 dialects. Nigeria is West Africa’s largest producer of petroleum with the Niger Delta producing around 2 million barrels a day. Oil spillage is a fallout of oil drilling in the Niger delta region, with an estimated total of over 7000 oil spill incidents reported over a 50-year period. The Niger Delta’s vast production, and subsequent spilling, of crude oil has resulted in pollution of the region.

Effects of Oil Pollution on the Niger Delta

Major oil spills in the coastal zone include the Forcado tank 6 Terminal in Delta state incident that spilled 570,000 barrels of oil into the Forcados estuary in July 1979, polluting the aquatic environment and surrounding swamp forest; the Funiwa No.5 Well in Funiwa Field that spilled an estimated 421,000 barrels of oil into the ocean from January 17 to January 30, 1980, destroying 836 acres of mangrove forest; and the Oshika village spillage in River state that spilled 5,000 barrels of oil in 1983, flooding the lake and swamp forest and causing high mortality in crabs, fish, and embryonic shrimp. While major spills have not plagued Nigeria recently, an average of 240,000 barrels of crude oil are spilled in the Niger delta every year, in large part due to unknown causes (31.85%), third party activity (20.74%), and mechanical failure (17.04%). The spills have contaminated the Niger Delta regions water, air, and plants with trace metals that have accumulated in crops and harmful, potentially carcinogenic hydrocarbons such as polycyclic aromatic hydrocarbon and benxo (a) pyrene, and naturally occurring radioactive materials.

Along with the various effects oil pollution has had on the Niger Deltas vegetation and agricultural land, oil pollution has also impacted the health of the local residents. The ingestion, contact, and inhalation of constituents of spilled crude oil may have acute and long-term health implications. Although the acute manifestations of the exposures are often transient, severe exposures can result in acute renal failure, hepatoxicity and hemotoxicity, and even infertility and cancer.

Though there is not a concrete solution to oil pollution and its effects on the Niger Delta, awareness is a key foundation for change. According to a study conducted by public health scientists (Best Ordinioha and Seiyefa Brisibe), oil spills in the Niger Delta can lead to as much as a 60% reduction in household food security, can reduce the ascorbic acid content of vegetables by as much as 36%, and can decrease the crude protein content of cassava by up to 40% if nothing is changed about current oil production methods in the Niger Delta; this can potentially result in a 24% increase in the prevalence of childhood malnutrition. Pushing for better handling of crude oil and the reduction of pollution, in the Niger Delta will lead to both healthier residents and a healthier environment. BUNF will implore the systemic thinking approach in coming about solutions. We will diligently avoid tackling symptoms or treating issues in isolation. We will thrive to come about fundamental solutions. This, we believe will bring about adaptive solutions instead of quick fixes.